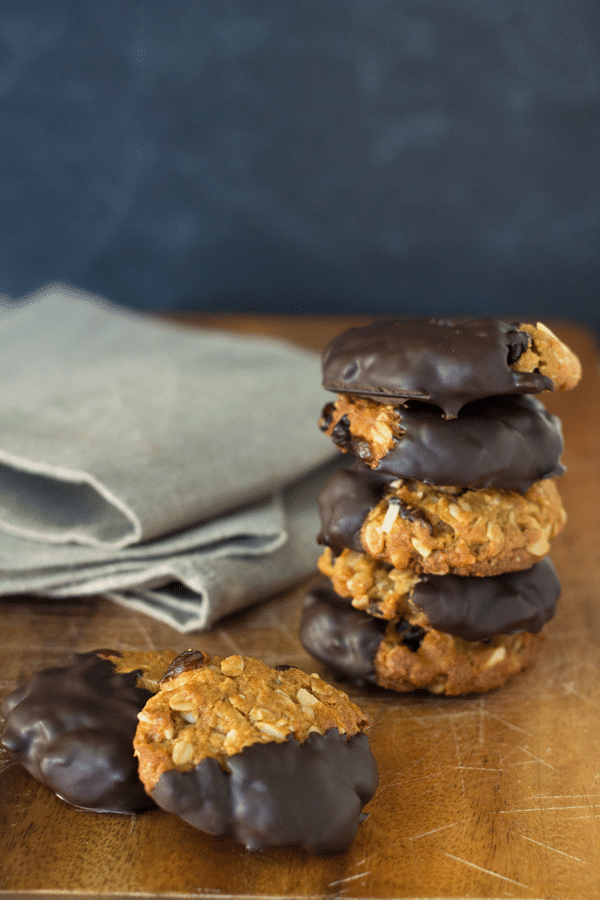 This weekend here in New Zealand and in Australia we will be celebrating ANZAC (Australian and New Zealand Army Corp) Day. Its our day of remembrance to honour those servicemen and woman who have served our countries.

There has always been a sense of camaraderie between New Zealanders and Australians – we are both relatively young nations on the edge of the globe, we fought together in wars, we congregate together in the UK for our big OEs and we both love rugby (although one of us is much better at it than the other ah hmmmm). But……we also have, shall I call it a ‘healthy’ sense of rivalry and banter! This includes our lovely big brother neighbours often claiming little old New Zealand’s achievements – the Pavlova, Crowded House, Phar Lap, Russell Crowe (you can have him Aussie), even our biggest export Lorde, they refer to her as ‘Australasian’! Also ANZAC biscuits! Yes Aussies, they are actually ours. ANZAC biscuits are a chewy, oat and coconut cookie with a caramel like taste. As popular belief goes they were what the Australian and New Zealand soldiers ate in the trenches during World War One. But! I was reading Alexa Johnston’s book ‘Ladies, a Plate’ and she suggests that a university professor actually did some research recently and it turns out that the biscuit first appeared in a New Zealand cookery book after WWI. Really, you stole another thing from us Aussie? Jokes! I like to believe the popular story, it is a much nicer story for our two countries. 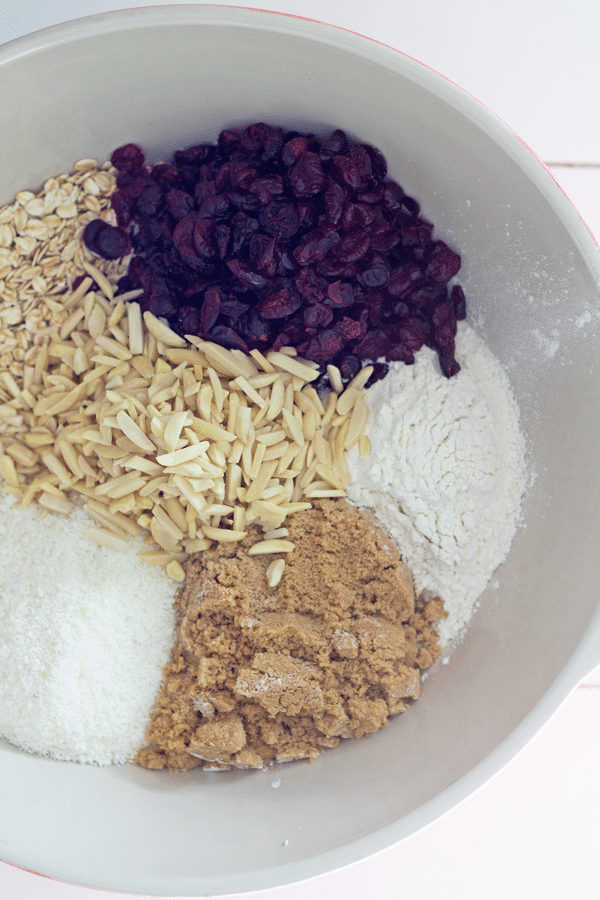 Every year on ANZAC day there are dawn services around our two countries. I am ashamed to admit it, but I had never actually been to one until my adult life. Since then, however, I have been to them without fail. I was in the military for some time and did all my university study and military training at an Australian military academy (so I have copped my fair share of Aussie banter). It was a tradition that every ANZAC day we would get up super early in the cold Canberra autumn and have what is called a ‘Gunfire Breakfast’ before going off the the dawn service. Here we would have, what I thought, was the most delicious ANZAC biscuits (I think I was just hungry because they were actually pretty plain) and coffee with, wait for it, rum. It was pretty good I must admit. Nowadays I am far to old and sensible (read: boring) for (a) getting up early enough for breakfast before the dawn service and (b) having rum before the sun comes up, but I still get up for the services and hopefully will this year depending on how my little toddler is, we might wait for the family service later in the day instead. 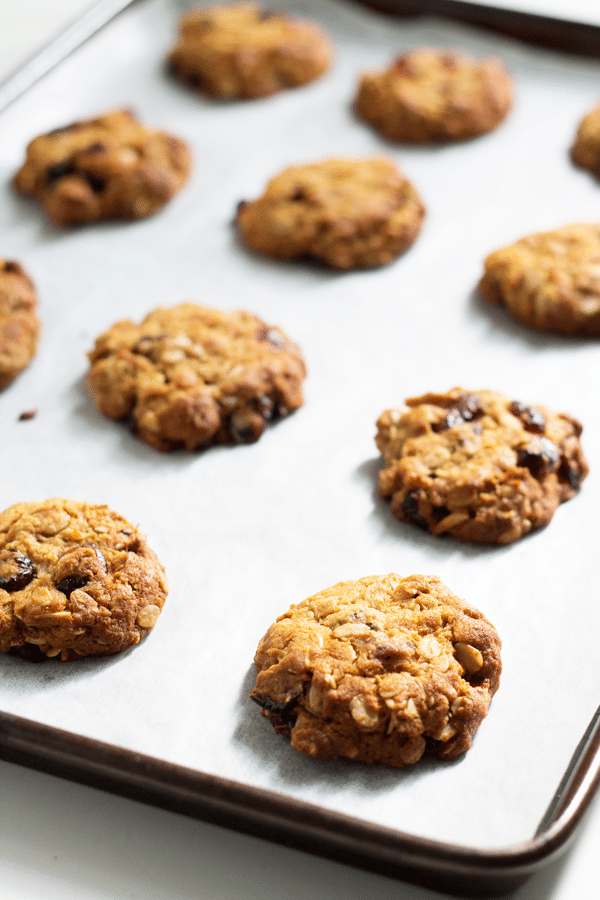 My recipe for ANZAC biscuits is by no means authentic but I think they are equally, if not more, delicious. The originals just have oats and coconut in them and if you really wanted to go crazy they also have a few raisins or walnuts. I love the addition of sweet cranberries and crunchy almonds and not to mention dark chocolate, everything is better with chocolate don’t you know! I like dark chocolate so I coat mine in 70pct cocoa dark chocolate (plus, my husband is o b s e s s e d with dark chocolate so I really didn’t have a choice). However, white chocolate is also delicious, if a bit more sweeter. My recipe is also not quite as thin and crispy as the traditional ANZAC biscuit we are familiar with, but I like the chewy cookie-like texture. This recipe does make a lot, but that’s great because you can share and they easily keep for a week in an airtight container, but the recipe works just as well if you half it. 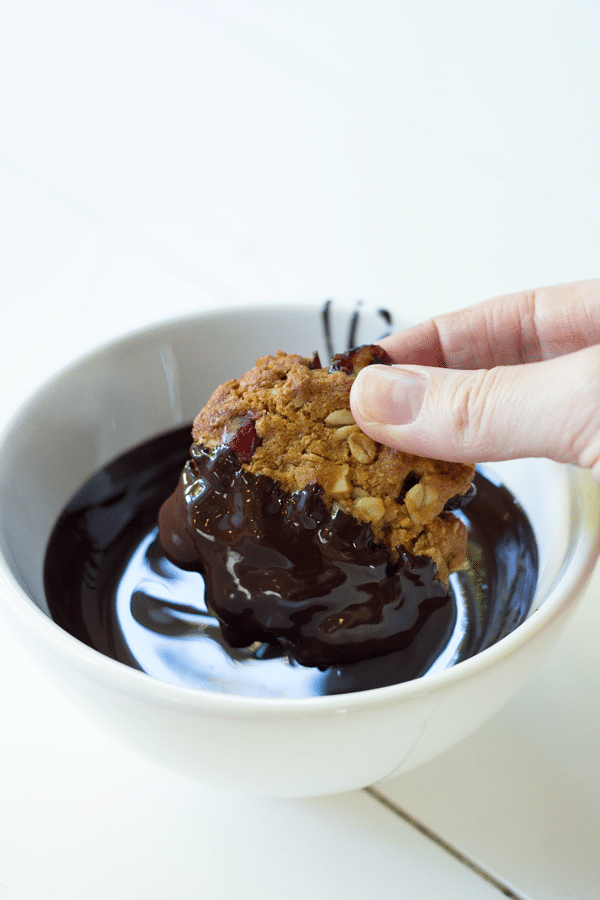 This year is special as it is actually 100 years since the battle in Turkey that occurred on the day in which ANZAC day is observed. Whilst we shouldn’t forget those brave soldiers, more importantly I hope that everyone’s hearts go out to those brave people who are serving us today. 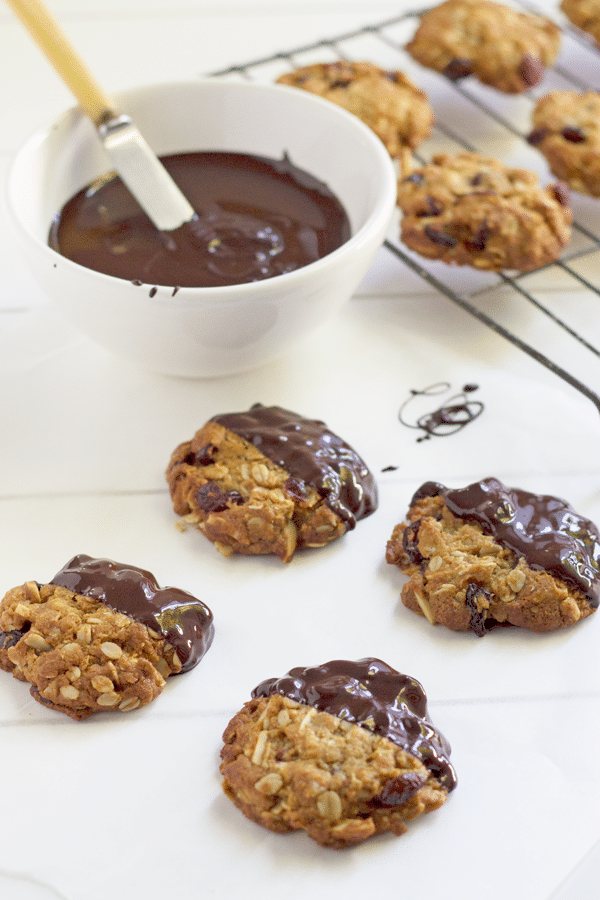 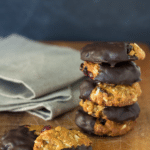