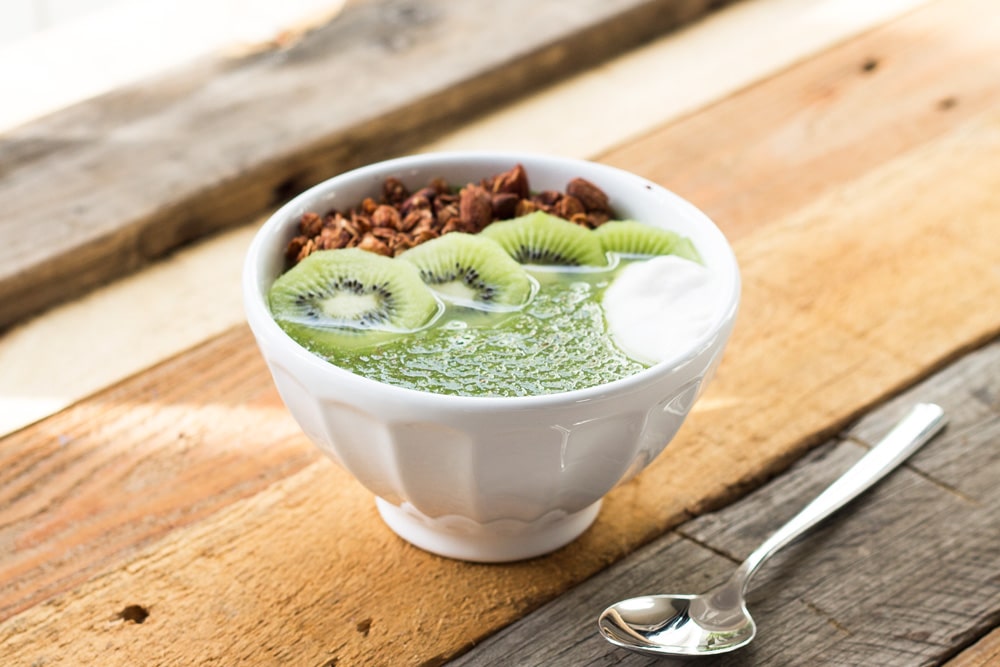 These smoothie bowls are A.M.A.Z.I.N.G.

They are so good that for the last two weeks I have had nothing but these for breakfast. I am obsessed. I know, I know, all of you who read my previous recipe for Healthy Chocolate Banana Granola which I posted just a mere three weeks ago will remember that I confessed that I am a cereal gal through and through and all I ever eat for breakfast is cereal. Yes, nothing quite compared to cereal…or so I thought. Since trying my first smoothie bowl from Jamie Oliver’s Everyday Super Food I have been obsessed. They are just so tasty, fresh, light but filling at the same time. You feel like you’re being healthy getting a couple of servings of fruit and veggies in but at the same time you don’t feel like a cow chewing your way through a big bowl of grass.

I never actually planned to put this recipe on the blog. Last week I took a snap of my breakfast and put it up on Instagram and Facebook and I was so surprised when I had a number of people ask me for the recipe. I didn’t think it would be so popular. In fact I thought I would get the opposite response and people would scoff at me thinking I was trying to be all trendy (no chance of that here my friends, with a physics and maths degree, flannelette shirt and big wooly slippers on right now there is definitely no chance of that). Next she’ll be going all Paleo I could hear people saying (ha! again no chance of that I love you way to much carbs….mmmmm….carbs). Well my friends, I think we need to (in my case, try to) be cool and embrace this trend. It’s a goodie.

This Easy Green Smoothie Bowl is great for anyone who has never tried making a smoothie bowl for breakfast because it is so darn easy…and tasty. It’s full of spinach, kiwi fruit, mint and chia seeds and is sprinkled with some crunchy granola and topped with some creamy yoghurt. So it’s healthy (5+ a day…spinach tick, kiwifruit tick), full of energy (chia seeds are not only full of omega 3 to make us smart ha! but are also a little energy boost), mint for flavour and some filling protein from your yoghurt. The whole thing is blended up with some boiling water so it is super comforting and warming in the winter (you may want to go half boiling water and half cold water or even freeze cut up chunks of kiwi fruit to make it more refreshing in the summer). You’ve no doubt seen a lot of people use high speed blenders to make smoothies which turn out so velvety and creamy but I don’t have any of that fancy equipment, firstly I don’t have the room and secondly I really am too lazy to get out the heavy machinery every morning then wash it up. So I just use up little stick blender and while it doesn’t quite make it as creamy as a high speed blender might, it is equally delicious. You could also use a food processor if you don’t have a blender.

Once you start making this it won’t be long before you’ll be experimenting with other smoothie bowls and the toppings – blueberries, bananas, strawberries, mangos, nut butters, coconut… so many possibilities.

So enjoy and cheers to a yummy, healthy but super tasty breakfast.

P.S. This is a great one for any pregnant mama’s out there. Lots of kiwifruit if you know what I mean wink wink.

1. The boiling water makes this deliciously warm and comforting in the winter, but if you would prefer it more refreshing in the summer then either spilt the water making it half boiling and half cold or pre-freeze chunks of kiwi fruit and pop them into the blender with the rest of the ingredients.