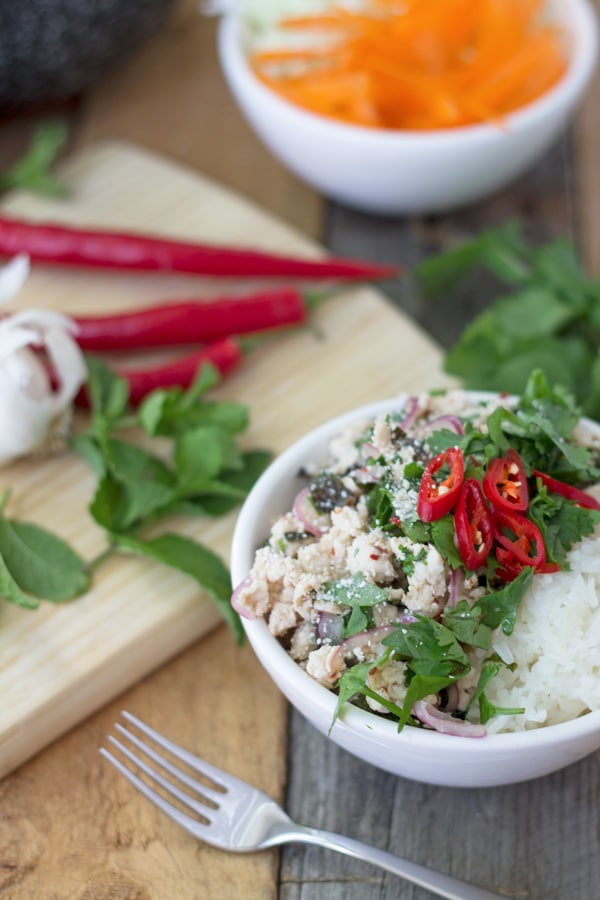 I would love to say that the first time I tried this dish was on a beach or at a rustic local market in Thailand but that would just be fibbing. The first time I heard about this dish and then tried it was unglamerously at our local Asian food hall called Food Alley in Auckland, NZ (which looks a little rough around the edges but does awesome food by the way!). In my previous like as a navigator my section and I would often go to the food halls for lunch on a Friday, don’t worry, we did work pretty hard…sometimes! I’m not sure if it was a coincidence or that we all fitted a certain personality profile when we were selected, but pretty much all of us just loved food, which was all right by me. So anyway, two navigators in particular really knew their food and convinced me to branch out from my old favourite the red tofu curry and try Thai Chicken Larb. It. Changed. My. World. This salad really does optimise the salty, sweet, sour and spicy balance synonymous with Thai cuisine. Its a flavour explosion in your mouth that is so addictive that you just have to keep going back for more – but that’s okay, because its totally healthy! So the next week I had to take my husband, then boyfriend, to try it, and yes he was hooked, we had another Thai Chicken Larb addict. But it didn’t stop there. We had take out a few weeks later (yes, we did go on a bit of a Thai Chicken Larb binge in the following months) and my big fat cat was hanging around us while we were eating – nothing new there – so being big softies we decided to give the cat some. I wasn’t to sure about it because we did have it quite spicy but low and behold the cat loved it! The next time we had take out as soon as he heard the plastic take out containers being opened he went crazy until we gave him some and so it continued every time after when we got Thai take out (he was very disappointed the day I opened a take out container of Penang curry). Another Wright family Thai Chicken Larb addict was born. I did feel sorry for him the day Will got Thai hot Larb, Will claims that the cat didn’t have to eat it, but if you’ve seen our cat you would understand that he doesn’t know quite how to regulate his food intake, if its in front of him, he’ll eat it. He was very thirsty that night. My toddler George on the other hand still thinks Larb is “paaaw! euuuww! yuck!” but that’s his general reaction to any food that’s not bread, custard or raisins – so I think there’s still hope yet!

Its so easy on a Friday night when you’re tired from the week and can’t be bothered cooking to just call up for take out – that’s definitely my story far too often. But my recipe for Thai Chicken Larb tastes just like it does from the Thai restaurant (or so my friends and family tell me) and what’s more its so easy that you really can have the energy to make this on a Friday night, or even midweek meal, instead of calling up and paying for take out. This salad is very figure friendly, not an ounce of fat in sight, but lets be honest, if you call up for take out you’re not just going to stop at the larb, I know that a few money bags, some curry puffs and maybe some pad thai is going to sneak in there too tsk tsk! So by making my at home version you really are being good to yourself. 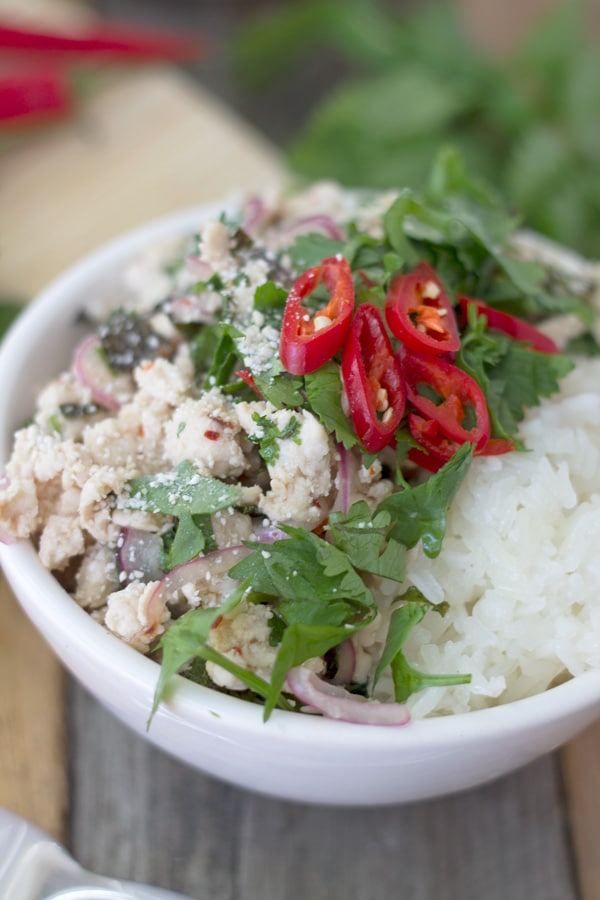 When you make the salad, follow my recipe but make sure you taste along the way. Like most Thai recipes the flavour explosion and success of the dish really relies upon perfect harmony between the sweet (sugar), salty (fish sauce), sour (lime juice) and spicy (chilli flakes) elements of the dish. So once you’ve added the fish sauce and lime juice, have a good taste to see if you have to add any more of anything, your limes might be extra sour one day and less so the next. If unsure, just follow my recipe, it will give you a great Thai Chicken Larb!

So skip the take out and try my version. Welcome to the Thai Chicken Larb addicts club! 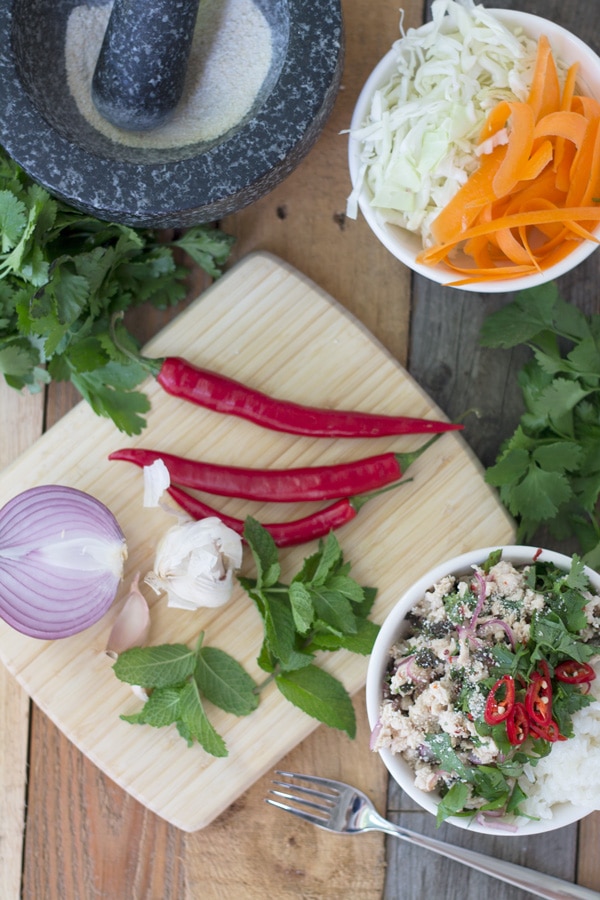 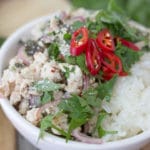